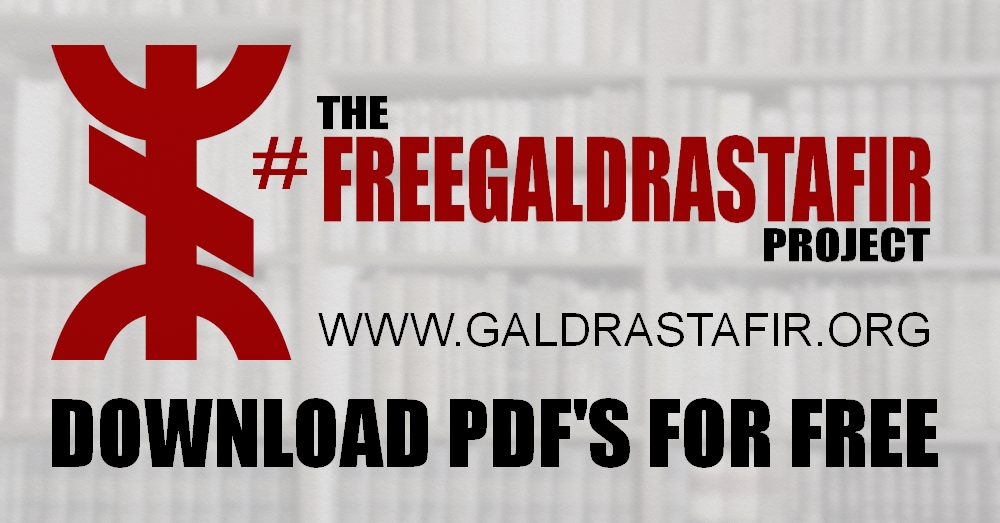 As a part of project #freegaldrastafir we have decided to make all manuscripts available for easy download from our servers.
The purpose of the project is to make as many manuscripts as possible available in as high quality as possible for digital download. We strongly believe that these old manuscripts are to be freely available in digital form, so we present them 100% free for anyone who seek them out.

Anyone is free to download these files and use them as they see fit. So feel free to redistribute these manuscripts, share links or even print them out and make your own physical copies from the PDF-files supplied.

This is a remastered Galdrakver manuscript (lbs-764-8vo) of unknown hand from the 1700’s. The content have been edited and compiled into a single PDF format for easy access.

This is the remastered version of the original Galdrabók manuscript (ATA Ämb2). The content have been edited and compiled into a single PDF format for easy access.

A remastered version of the popular Huld Manuscript (ÍB 383 4to). This enhanced hi-resolution copy was edited and compiled into PDF format for easy access and free distribution.

Remastered version of The Galdrablöð (JS 375 8v blad 3). The original manuscript is a compilation of several manuscripts compiled together. In an effort to optimise file-sizes, the manuscript have been split into it’s original parts again. All volumes have been edited and graphically enhanced for best quality, and compiled into PDF format for easy access.

Remastered version of The Galdrastafir Manuscript (Lbs 4375 8vo). The PDF have been edited for better quality and presentation and made available for free by Ræveðis.

This version of Hvíta Galdrakver (AM 343 D 12mo) have been edited and optimised for best possible quality by Ræveðis. The entire manuscript have been compiled into a single PDF file for easy access.

The Galdrakver Manuscript (Lbs 143 8vo). This remastered version have been edited and compiled into a single PDF for easy access.

A remastered version of The Lækningakver Manuscript (AM 434 a 12mo). Edited and compiled into PDF format by Ræveðis for easy access. Please feel free to copy, share and redistribute this file.

Remastered version of the Leifar manuscript (LBS 3902). Due to the huge size of this document, the content have been split into four volumes. All volumes have been edited and graphically enhanced for best quality, and compiled into PDF format for easy access.

These files are free to download and redistribute. If you find anyone online who are selling digital copies of our supplied PDF material, please help making other aware that they can be found for free right here!

This is the remastered version of the third document of The Galdrablöð Manuscript (JS 375 8v – blad 3). The manuscript, as it’s archived in the Icelandic historic national library, is made from several documents, each comprised of several pages, and written by different authors of unknown identity.

This part of the complete manuscript contains several well illustrated galdrastafir, making it perhaps the most interesting part for most people. Apart from the other documents in the manuscript; these are presented in a slimmer portrait-format, and overall found in very good condition (especially if compared to Blad II)

The digital scans used for the PDF document we present here, have been edited and enhanced for optimal presentation in PDF format. 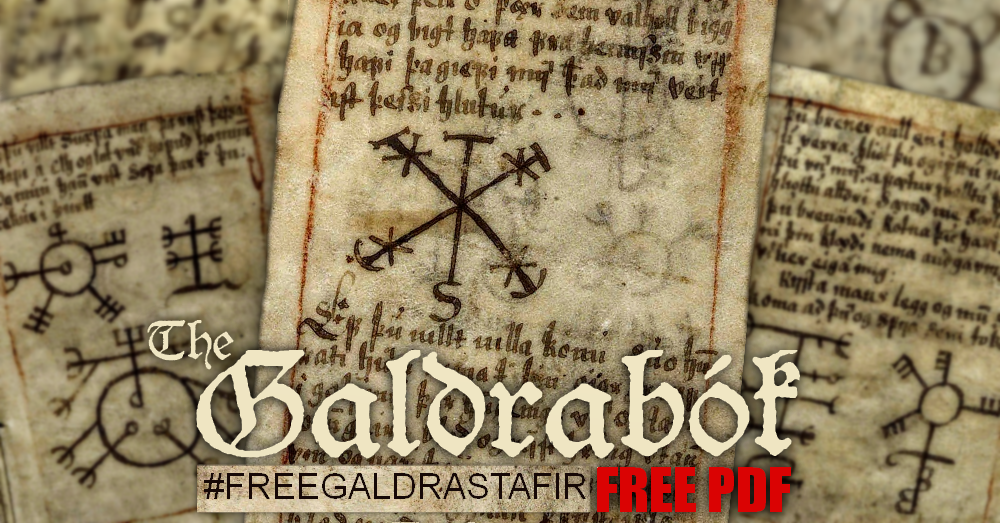 This is a PDF version of the infamous Galdrabók (MS ATA ÄMB2).
This book is often referenced in modern work such as Stephen Flowers’, but the manuscript itself is actually really hard to find in its original form.

As I’m sure you guys know, there’s not many of these old Galdrabóks left today. Many were burned as heretic books and others were hidden away by their owners to later be forgotten and decay into nothing in some nameless hiding-spot. Those that have survived however, can now be found stored away in several Scandinavian archives, while others are tucked away in private collections.

Back in the day, there were a lot of rumours of black art books like this one in existence. Books said to contain powerful magic in the form of depicted Galdrastafir, Spells, Troll-runes and more. One of the most famous historical manuscripts of this kind is the mythical “Raudskinna” (Red Skin). This fabled manuscript was said to have been written by the Icelandic bishop Gottsálkur Nikolásson (1498-1520’s), who was considered a very cruel man, and also one of the most powerful Troldmænd of his time. “Raudskinna” was lost to the ages unfortunately, as the story says the Bishop took it with him to his grave.

The Galdrabók that I’m sharing with you guys here however, is one of those manuscripts that survived. It’s actually one of the more infamous of the surviving black art books that we still have. It’s a small book compiled on parchment, consisting of 32 sheets in all. The oldest parts of the document were written down in Iceland sometime during the 16th century. Later, the book found its way to Denmark, and at the beginning of the 17th century a Danish Troldmand (sorcerer) supplemented the manuscript with more content. Alas, a more exact date for when this happened is obscured, along with the names of those who wrote the text. Some of the content is likely to originate from other Galdrabóks, but it’s really hard to say at this point.

In 1682 the manuscript was bought in Copenhagen by the Swedish language- and forn-researcher Johan Gabriel Sparfwenfeldt. During 1689-1694 he worked hard on collecting several “gothic” memorials and manuscripts for the Swedish Antiquity Archive.

In 1786 the Swedish Antiquity Archives was placed under management of the Royal History and Antique Academy, and this is where the manuscript can be found today – indexed and shelved as ATA ÄMB2.

Another historic Icelandic manuscript. There are certainly a lot of these manuscripts in circulation- and because of the age of them, they are in the public domain. This is why I want to ensure they are available for free.

This one, like some of the manuscripts, is written on animal skin. If you have worked within a magical circumstance, you may have noticed that animal skins or parts play a key role, especially in the old magic like this! (the fact that wood is sparse on Iceland also explains why parchment is often used instead of paper)

This is a PDF of the manuscript- not a physical copy. However, it is up to you if you wish to use this with your e-reader, simply saved as a file, or have it printed off (You don’t even have to use parchment, paper works too!).

This manuscript contains many diagrams and prayers, as well as written information to describe the things within. It is all written in old Icelandic- so it may be a bit tricky to figure out if you are not used to both cursive and Icelandic language.

Remastered to improve the visual presentation of this original text. Copying a book, especially, can be a very tricky task to undertake. So I have tried to ensure that the pages more or less line up, etc.

A fantastic addition to anyone’s collection. 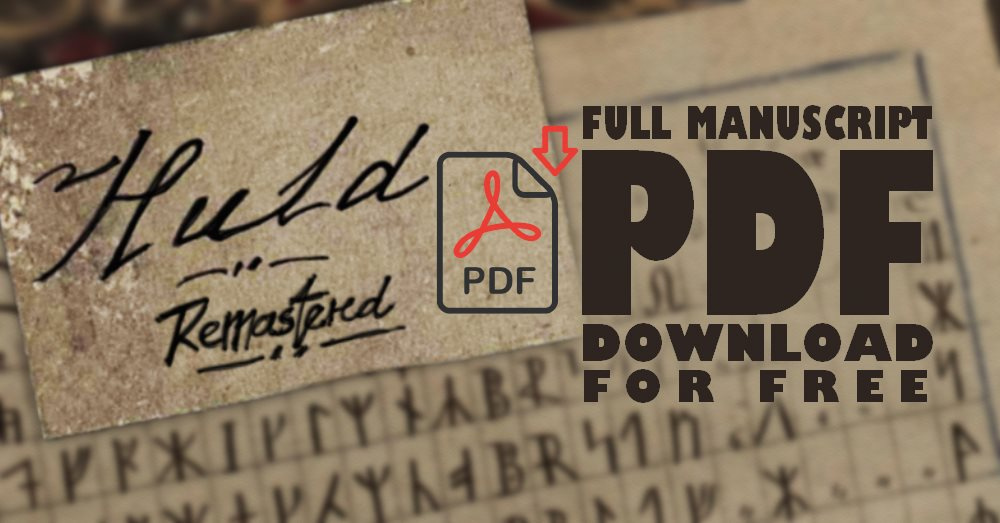 Available for free download is a remastered version of the historic Huld Manuscript. Many of the staves and galdr you will see today are based on aspects of elements within this manuscript, and others like it.

I initially got a hold of this scanned version of the manuscript via a fantastic resource website based in Iceland. You can view many things on there, and the main languages you can access articles and manuscripts in are English, Icelandic and Danish. This is the site: Handrit.is

It is thought to have been written in approximately 1860 by Geir Vigfússyni. I have been releasing packs of stencils of some of the galdrastafir from manuscripts, and I wanted to make sure that this full PDF copy would be available freely without having to cost money.

In terms of re-mastering, I have done my best to make the page margins more even (old books tend to be extremely crooked), and I have also altered the colours and contrast within the manuscript to make it more legible. When these old manuscripts are scanned, you can lose a lot of the clarity which was originally intended.

The scans can come out very dark, and the ink may not all match up. A lot of the time you will also find that the copies themselves are not straight, as it is very hard to photocopy a book- as I’m sure you are well aware!

Below you can download a copy of the PDF for use on your computer, tablet or even your e-reader if it is compatible with reading PDF documents.

The document is considered Public Domain, and you’re free to copy, share and redistribute it as you wish. 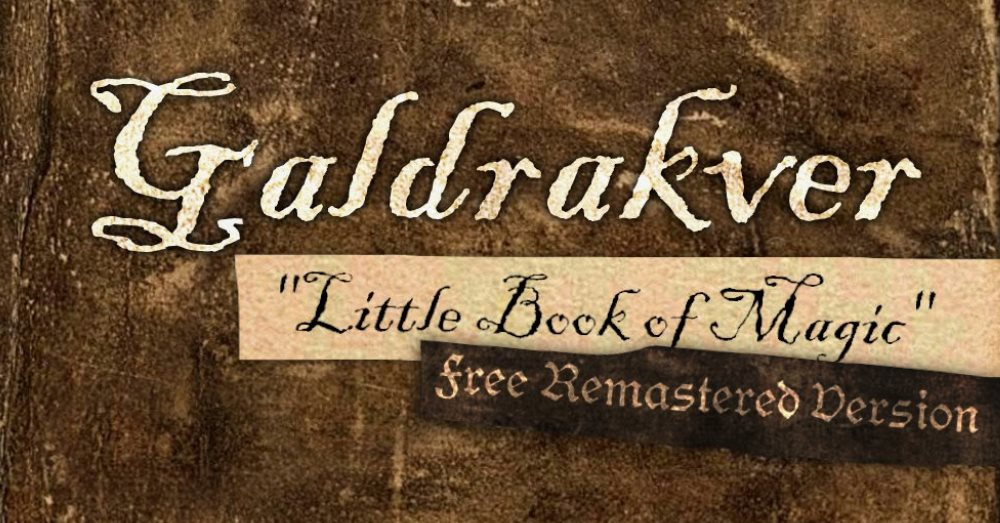 Galdrakver or ‘Little Book of Magic’ is a 17th century manuscript, written entirely by hand on animal skin. The writing surface explains both the colour of the pages, and why some parts are a little hard to make out fully. It is said to have been unusual at this time to have written on animal skin- most people would have been using paper at this point.

The manuscript itself contains many diagrams and prayers, as well as a lot of handwritten material gathered by the original author. It was bound in a soft cover somewhere in the 19th century, presumably to protect it.

The original book itself was at one point owned by Hannes Finnson. He was born 8th May 1739 and died 4th August 1796. He was also the Bishop of Skálholt, southern Iceland. Around 95 manuscripts have been associated with this Bishop in particular. So it is safe to say he was a bit of a collector!

However, this edition has been straightened out and made as legible as possible by myself to ensure you are able to use this in your own collection or however you wish.