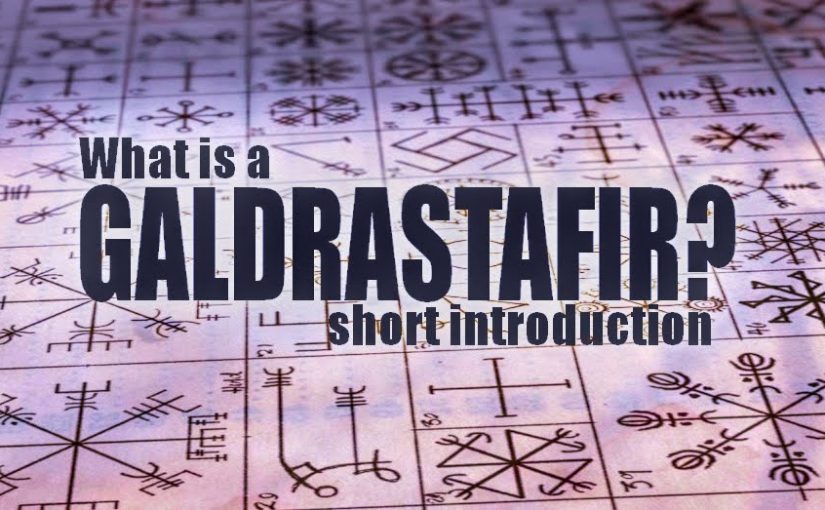 A ‘Galdrastafir’ or ‘Galderstav’ is a form of magical sigil known from Scandinavian folklore. Contrary to popular belief, these sigils do not stem from the Viking Age. Although having roots in both Scandinavian Folk Magic and Norse myths, a huge historical influence comes from Medieval magic and European renaissance magic, which is especially noticeable in the 15th and 16th century.

To explain the meaning of the word ‘Galdrstafir’ or ‘Galderstav’, we first need to break it down its two main components. The first part; ‘Galdra’ or ‘Galder’ is commonly translated to the English word ‘Magic’ or ‘Magical’. While we can go into a lengthy talk about the different ways one can relate to the word ‘galdr’, let’s just for the sake of keeping things short, settle with the fact that ‘Magic’ is not a bad translation.

The word ‘Stafir’ or ‘Stav’ is commonly translated to ‘Stave’ or ‘Stick’. One may immediately think this is referring to the straight lines used in the designs looking like staves, as well as the often used medium of physical sticks and staves, for etching these magical sigils into. While both of these assumptions make sense and can be seen as a ‘correct’ interpretation to the words meaning in this context, it’s still worth looking a bit closer at this one: The word ‘Stave’/’Stafi’ in the Scandinavian languages, is also commonly used to describe the act of ‘spelling” as in spelling letters to make up words of meaning.

The word-origin of the word ‘stave’ with the meaning ‘spelling’ is actually believed to stem from old Norse and Germanic times when runes were often etched into staves of beech to form short messages. A stave such as this would have been called a ‘Bøgestav’ (Beech-stick). Those with a little knowledge of Scandinavian languages should notice the close resemblance to the word ‘Bogstav’ which is common in Danish, Swedish and Norwegian. ‘Bogstav’ simply means the same as ‘Letter’ does in English. In Icelandic however, the word for ‘letter’ is simply ‘Stafi’.

It’s also worth noting that the English word “Book” and the Scandinavian “Bog” “Bok” and “Bók” basically means “Beech”.

So what is a Galdrastafir, and what is it used for?

Most of the time a Galdrastafir can be seen as a graphical representation of a magical spell. Depictions of magical staves found in old manuscripts are sometimes accompanied with some sort of description, explaining both the purpose of the staves as well as how to use the magic.

To use a magical stave is sometimes as simple as simply drawing it on a piece of paper and carrying it in a pocket, other times it becomes a rather elaborate task, involving very specific materials such as blood from specific animals, skins, herbs and so forth. For anyone with knowledge of Scandinavian Folk Magic, these elaborate steps to cast certain spells should be quite familiar.

The purpose of these spells can range from simple good fortune in life, gaining good luck in fishing, protection from one’s enemies and divination (spådom). More sinister spells such as raising the dead, causing illness and even death can also be found.

The most numerous examples of these types of magical staves can be found in the remnants of Icelandic Folk magic, as the Icelandic magicians were notorious for preserving these in several manuscripts. Some of these dating back as late as the 1400s. Due to Iceland being the epicentre of the historical remains of this magical tradition, the Icelandic word “Galdrastafir” is an often used term to describe them. However, examples of similar staves can be found in English, Norwegian and Danish manuscripts. The 12th-century manuscript “The Calendar and the Cloister” (MS 17 folio 7v) is a good example of an eight-spoked sigil with the same fundamental design as the infamous “Vegvisir” and “Aegishjalmur” staves.

Typically these manuscripts would also contain vast indexes of cipher-glyphs and cipher-runes, commonly known as “Løn-runer”. These runes were often seen as a mean to obscure part of a written spell by ciphering crucial content, but ciphering can also be used as a step in transforming intentions into a sigil form.

Other runic glyphs that we often see in the Scandinavian manuscripts are known under several names such as “Trold-runer” or “Mål-runer”, as well as “kennings-runer”. These runes are often conveying more magical meaning and associations with them, sometimes referring directly to specific parts of lore or mythology, and are often incorporated into the design of Magical Staves.